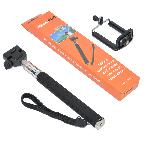 After using a tree branch as a selfie stick for the GoPro recently, I realized the necessity of a monopod that’s beyond basic vanity.

there was no reason to not click the buy button.

But after receiving it and trying it out, I wish I hadn’t…

Although, this thing isn’t entirely devoid of merits…

So, the verdict is that I could have bought sticks of wood worth  that would have been more reliable.

Or perhaps this, but it doesn’t come with the phone bracket adapter thing, so you’ll have to buy that separately.

Someone I know is using this one and he says it’s good.

But, in under 2,000, you’ll have a decent, reliable selfie stick with a mobile holder and a GoPro mount, which isn’t bad.